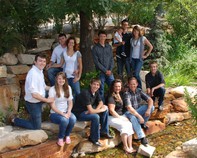 Deckit Spas, llc was established in the summer of 1994 by Candis & Brian Twede.  With a deep desire to provide their customers with Personalized Quality Service without sacrificing the welfare of their family, they chose to open their store as a home-based business.  Coupled with quality products that require minimal service, they have achieved their goal.

Though many said it couldn't be done, Deckit Spas has remained in business for over 27 years and has been established as a reputable company because of their dedication to those they serve.

Candis runs the day to day events of the business, including sales, service, and even accounting midst the regular day's events that involve her family.  Brian, who's day job is out at the INL site, helps her on the evening & weekend deliveries and with up to four shows she does each year...Home & Garden Show in Idaho Falls in mid-march, Spring Fair in the Holt Arena in Pocatello, Idaho in late March, the Eastern Idaho State fair held in September in Blackfoot, Idaho and the occasional Fall Show in Idaho Falls.

Candis and Brian's children have also helped out with the family business over the years since they opened.  Today, their 3 daughters have graduated from college, with one in Connecticut working on her PHD.  Two of their 3 sons have graduated from college at Utah State and their youngest is attending UVU in Provo.  Candis & Brian also gained 3 sons-in-law over the past few years as well as 2 grandsons and 5 granddaughters.

As Deckit's hours can vary, please contact Deckit directly prior to stopping by, or to arrange a personal appointment.

Get Social With Us